Pieria. The land of Gods

Pieria is the land of myths, the gods and of the Muses. It is the ark of spirit with a rich cultural past. It is the land of abundance, a blessed place with breathtaking nature and historical heritage. In Pieria senses come alive by the magic of the landscape and the integrity of nature. Mountains and sea, green and blue, myth and life found in wonderful harmony. 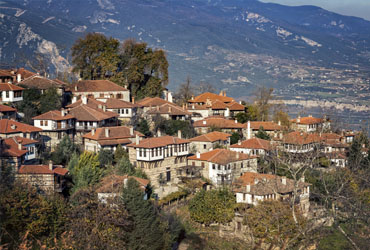 live the greek-blue at Ikaros Apartments

A traditional village perching at the hills of Olympus at 500 meters altitude. In close reach from Katerini, Old Panteleimon has become an impressive touristic attraction over the last years.

You can taste local cuisine in various traditional tavernas in the village centre, enjoy the local sweets and pastries and visit the old church and the old school laying under the shade of the agelong plane tree.

Nature lovers can find various activities such as mountain biking, hiking and rock climbing. Distance from Paralia 35 km and only 12 km from Platamonas.

Platamonas is awarded for many years with the Blue European Flag. Its trademark is the 12th century Franc castle, surrounded by rich greenery and guarding the Aegean Sea from a beach hill. People can enjoy swimming underneath this marvel as well as visit its interior.

The town has a very organised beach amazing for swimming, diving, sunbathing and just relaxation. Dozens of commercial stores are open until late at night and the small port is suitable for you to anchor your boat if thats your vacation style.

Night life in platamonas is amazing with the town bustling with energy! Night clubs, bars and restaurants are there for you to enjoy and have an amazing time. Distance from Paralia is 39 km and only 12 km from Old Panteleimonas that we recommend visiting.

The village of Dion might be small but it embraces a very large history and heritage. The Father of History Thucydides gives his first report on the ancient city of Dion at 424 BC. Named after the god Dias (Zeus), the city was declared by the kings of Macedonia as a cultural and spiritual place honoring Zeus and Orfeus and even Alexander the Great began his campaign to Asia from there.

Today the visitor can find there a huge park with the ancient city's ruins and also the museum that holds hundreds of artifacts found in the area. There are numerous restaurants and coffee shops for you to dine and take a rest.

Furthermore about a kilometer out of the town, the melted snow water runs down from Mountain Olympus and forms the beautiful waterfalls of Orlias. Its a worthy small walk to take photos or even take a dive in the waterfall lakes in a hot summers day.

This destination is a hidden gem. Perched at the footsteps of Mountain Olympus near the village Vrodou you can find the 14th century church of Agia Triada (Holy Trinity). Built on the edge of a cliff the visitor can dive into an amazing panoramic view of the Pierian Valley and the steep mountain peaks of Olympus.

A little further down the hill there is a flight of stairs with 173 steps going down the ravine. At the bottom you will find another small church dedicated to Agia Kori (St Daughter or Maiden). The story goes that during the Ottoman Empire's occupation of Greece, an unknown young woman found refuge there from some Turks who were chasing her. The woman became a martyr as the legend goes and there were some miracles happening because of her.

In the area there is also another old Byzantine church, St Nikolaos, from 1700 at the ruins of the Old Vrodou village. There is no direct public transportation to these places so a car is required to go there.